You may recall that, while ‘networking’ is not an activity I seek out, the Seattle Chapter of Fashion Group International hosts events that are well worth flexing out of my comfort zone.  Another such event was held on February 11th:  The Bellevue Arts Museum hosted a private tour for our FGI Chapter: Stefano Catalani, BAM’s Director of Art, Craft, & Design, gave us a personalized tour of the exhibit he himself had curated: A World of Paper, A World of Fashion — Isabelle de Borchgrave Meets Mariano Fortuny.

Stefano escorted our group to the exhibit on the third floor,  began explaining the background and history of the fashions by Mariano Fortuny and how Isabelle de Borchgrave came upon the idea to create replicas of his (and others’) designs using her medium of choice: paper.

My medium of choice is photography, and I retrieved a camera from my bag and began photographing the proceedings.  After a very few shutter clicks, a friendly and professional gentleman with museum security politely informed me that no photography of the exhibit was permitted.  I returned my camera to the bag and closed it up tight.

Stefano (left) at the start of our tour — one of the few images I made during that first visit.

As the tour progressed, however, I felt a compulsion to make images of these amazing paper garments.  I approached the security guard to ask if there was a way I could get a press pass so that I could come back and photograph the exhibit for a piece on VIVAFASHIONISTAS.  He was extremely positive & helpful, and described the process for me [thank you, Dan!].  Near the end of the tour, I thanked Stefano for the thoughtful presentation, and congratulated him on the beautiful design of the exhibit, as well as the magnificent lighting.  I mentioned that I was going to work out a press pass arrangement so I could come back and cover it for our magazine.  He took my card, went to the front desk and left a note authorizing the press pass at whatever time I was able to get back: there was some time pressure — the exhibit closed the following Sunday!

I got home and immediately contacted our Editor-In-Chief Michelle Elalto Cuneta to pitch a piece about the exhibit.  She was enthusiastic, and so I contacted our Fashion Editor Alyssa Cave and she was all in (another Team Alyssa and Bret collaboration, so I already considered it a win!).  I contacted a visiting photographer friend, Alexis Knapp, to ask if she would like to join us, and perhaps contribute images for the #teamVIVA coverage.  With all the YES! responses, we collaborated to figure out the timing, and arrived at the museum just after opening on Friday, obtained our press passes at the desk, and headed to the third floor.  It was crowded!  We spent an hour and forty five minutes weaving and waiting for chances to make images of every piece on display.

Here are some of those images, as well as links to interesting reference material and a fascinating video produced by the museum showing the elaborate efforts to create the exhibit.  See Alyssa’s blog here.

Mariano Fortuny (1871-1949)  fascinates me: he was (among other things) a lighting designer (for stage productions), a photographer, and a fashion designer.  Right away, I imagined the interesting conversations we could have had!  The exhibit included many life-size photographs that he himself had made of models, including his wife Henrietta (a dress maker), wearing his designs. He developed a by-hand pleating process that is unrivaled and the fine pleats he formed are still crisp today.  His designs were worn by Lauren Bacall, Mrs. Conde’ Nast, and Isadora Duncan.

Photographs by Mariano Fortuny of his own designs. HIs wife, Henrietta, is modeling for him in the image on the right.

At the time, his designs were considered somewhat scandalous: the fine silk was styled without the heavy petticoat style of undergarments, and was weighted with beads to keep the pleated material flowing over and clinging to the shape of the body.  Despite the length of the garment, the manner in which it revealed body shapes was very daring for the time. 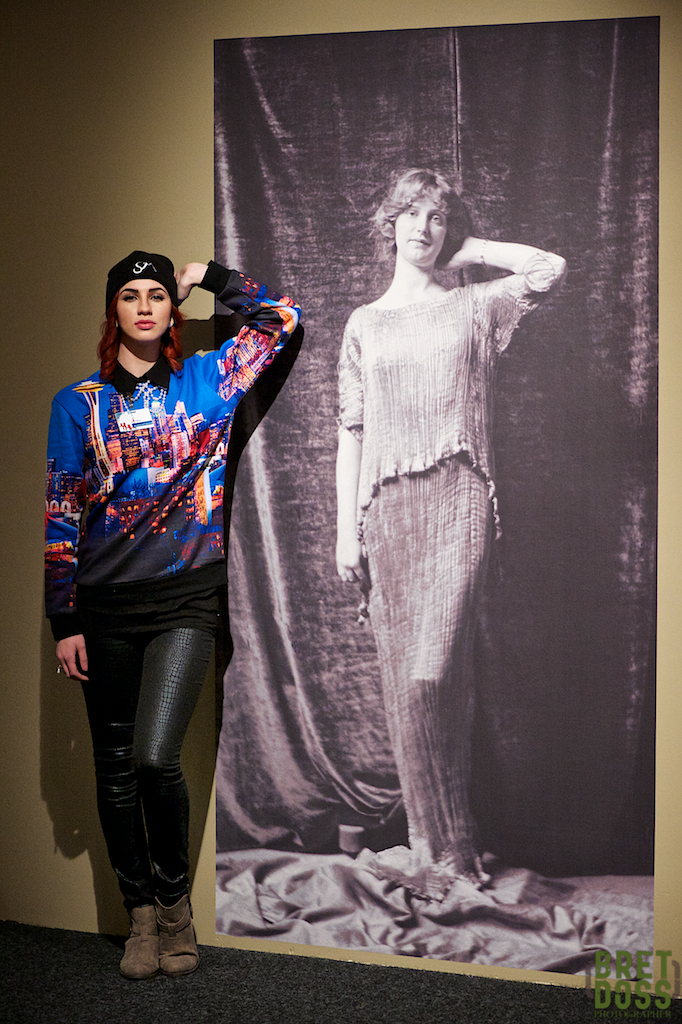 Alyssa strikes a pose alongside a model wearing one of Mariano Fortuny’s designs (and photographed by him). The thin, form-fitting material was considered too revealing of the body shape. That bit of knee was scandalous at the time, quite tame today.

Isabelle de Borchgrave, born in 1946, had no opportunity to collaborate with Fortuny.  She was an artist from an early age,  eventually had her own fashion design studio, but her specialty was design of fabrics. In 1994 she hit upon the idea of creating paper costumes, and it evolved into a project of creating paper versions of garments spanning 300 years of fashion design.  Her early exhibits were well received, and began traveling to museums around the world.  She received a commission to replicate in paper the wedding dress worn by Jackie Kennedy — the actual silk dress had become so fragile that it could not be handled, much less put on display. In 2007, she was invited by Museo Fortuny in Venice to create a body of work inspired by his designs.

Image of Isabelle de Borchgrave in her studio on display at BAM. Photo of the display © Alexis Ann Photography, used with permission.

Many thanks to Alexis Ann Photography for sharing this image and being so fun to work with that day!

Her work is meticulously detailed, with attention paid to matching the design, texture, shape and drape of the original garments.  Paper is the medium.  At times, viewing her work, it is almost impossible to believe that one is looking at paper.  She has mastered the material, the techniques and methods to create the pleats, to create veil-like sheets, and even beads, from paper.  Her work allows us to see garments from throughout the history of fashion, presented in an accurate and exceptionally realistic way.  We are invited to view these instead of original garments that may not have even survived, or are so fragile that they cannot ever be displayed for us to see.  Her pieces can be appreciated in multiple ways: the simple astonishment for her ability to render in this medium, the diligence with which she has sought to match the original garments in every detail, the fascinating recreation of fashions that we would never otherwise see, or all of the above!

A piece like is this shipped/stored flat, and is carefully, meticulously, & patiently ‘fluffed up” by hand over a period of at least 4 hours.

We each had our favorites, and if forced to pick just one, this would be mine. Luminous and light, it seemed impossible to believe it was all made from paper.

Detail from the garment above. Beads are made from cardboard.

Alexis (L) and Alyssa at the exhibit

The lighting was beautiful, and the exhibit design was superb.

Isabelle also fabricated shoes, slippers, and even boots out of paper. 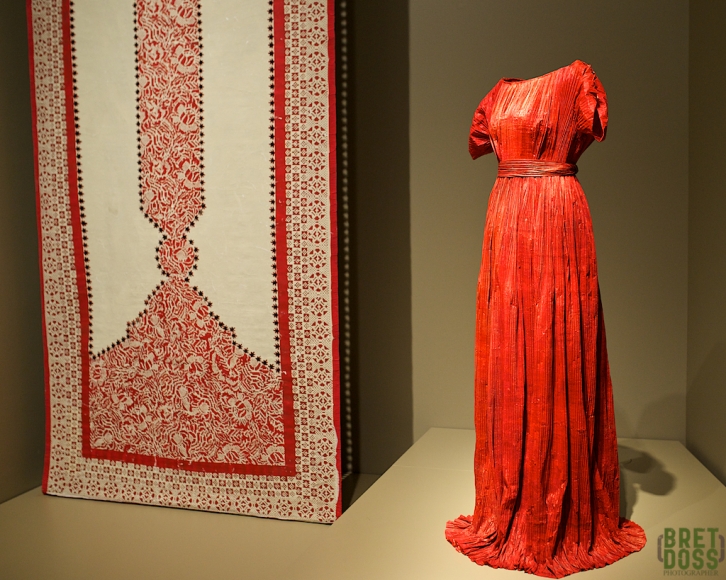 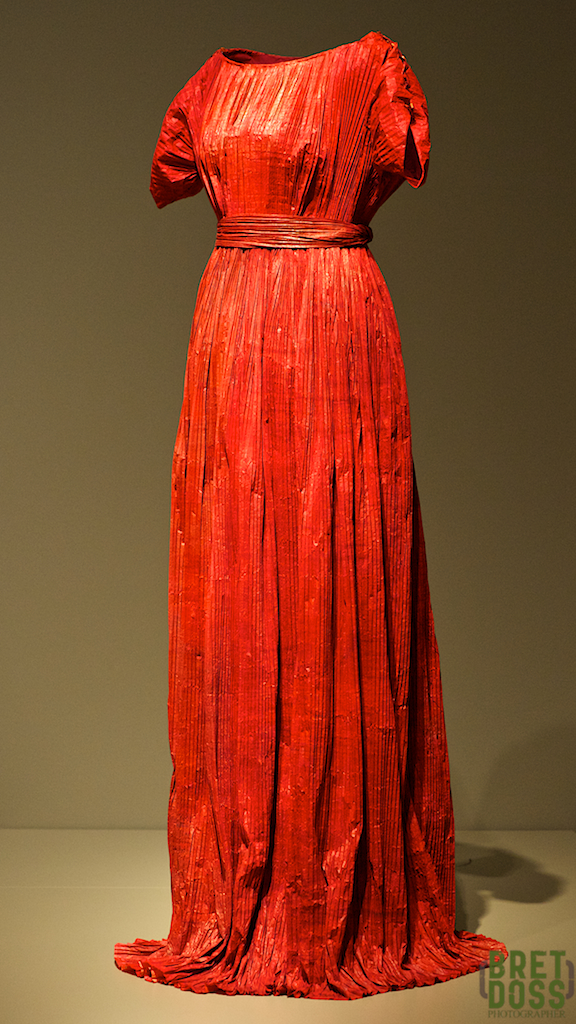 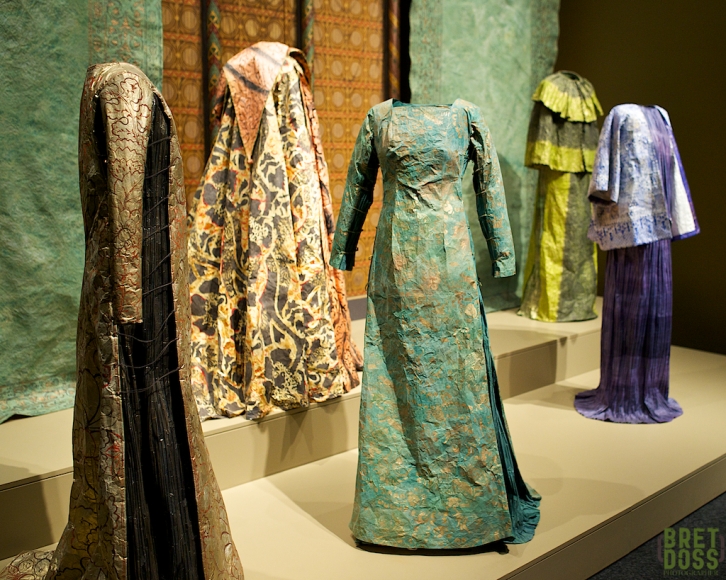 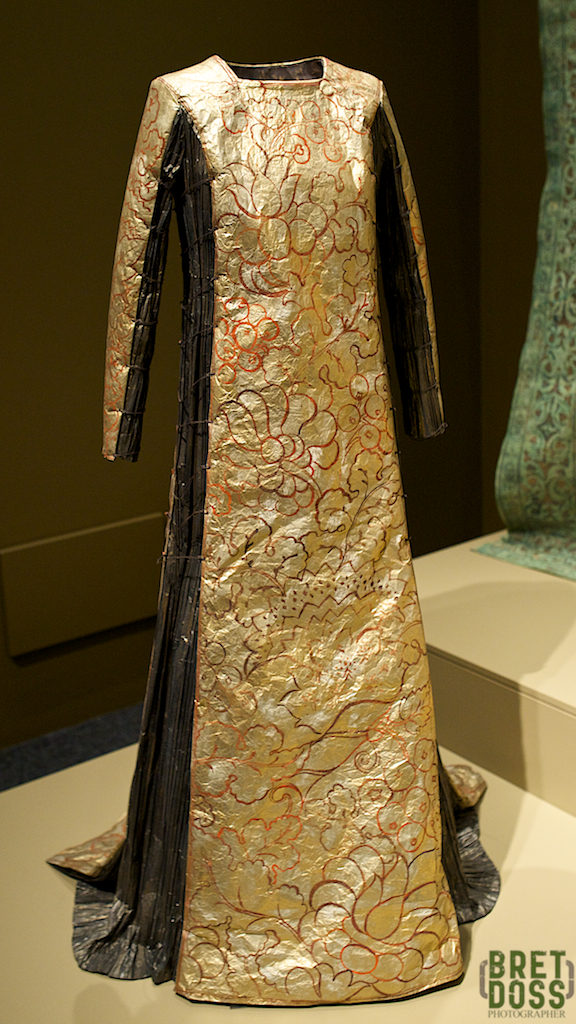 For reasons that I can’t quite explain, I found this one particularly intriguing. Maybe because it seems to be slightly sinister, like it could be worn by a character in a Tim Burton film. I can see Helena Bonham Carter wearing this, can’t you?

Unless otherwise marked, all content and images © Bret Doss 2014, All Rights Reserved, No Use Without Written Consent